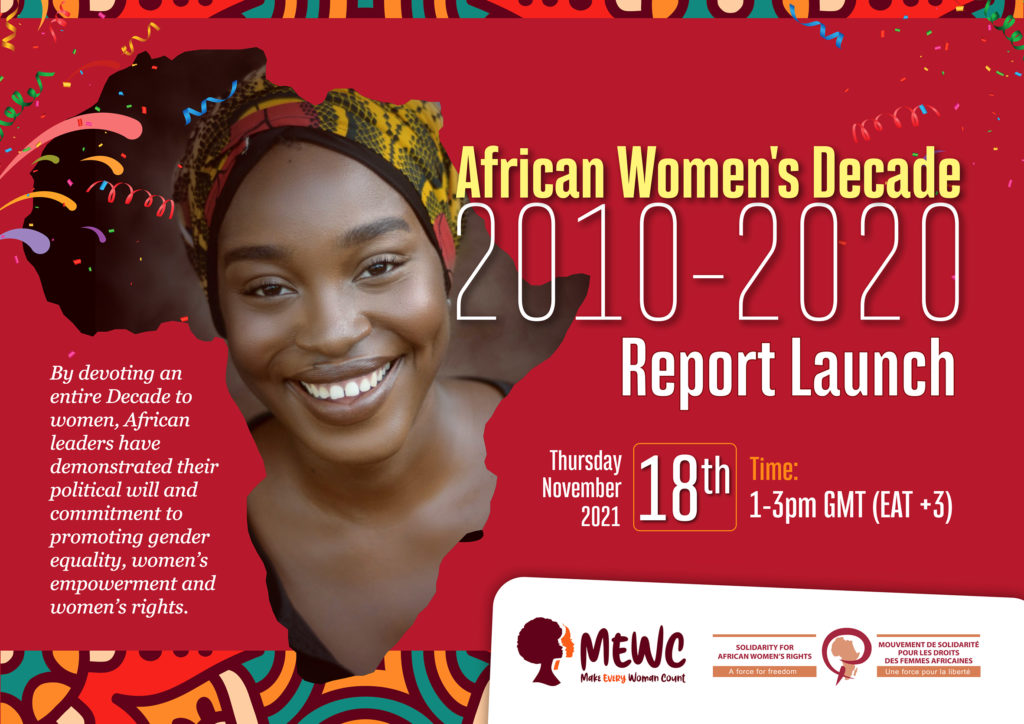 Read the Report & its Key Findings

2020 marked the end of the African Women’s Decade 2010–2020, adopted on 15 October 2010 in Nairobi, Kenya, under the theme “Grassroots Approach to Gender Equality and Women’s Empowerment.” The launch of the Decade represented a testimony to the African Union’s commitment to the advancement of the gender equality agenda and women’s rights across the continent. Its end has coincided with the celebration of the 20th anniversary of United Nations Security Council Resolution 1325 and the 25th anniversary of the Beijing Declaration and Platform of Action. Make Every Woman Count (MEWC), one of SOAWR’s Guinean members, used this opportunity to take stock of progress made in the past ten years on advancing women’s rights in Africa.

To celebrate the 10th anniversary of the African Women’s Decade and to officially launch the final AWD report, Make Every Woman Count held a virtual celebration on the 18th of November, 2021. The event brought together a diverse panel of speakers and women’s rights organisations, civil society organisations, governments and regional and international institutions. Rainatou Sow, the Founder and Executive Director of MEWC, presented the report and its key findings, illuminating it as an advocacy and accountability tool for women’s rights going forward. Dr Morissanda Kouyaté Minister of Foreign Affairs, International Cooperation, African Integration, and Guineans Abroad (Guinea) officially launched the report, declaring “African women will win!”.