Baobab for Women’s Human Rights condemns the rejection of Bills to enhance the lives of Nigerian Women.

At the commencement of the global Women’s History Month on the first day of March 2022, just few days to the International Women’s Day, 95.9% of male lawmakers at the National Assembly made history as the most unfriendly set of lawmakers when they voted against ALL the bills aimed at ensuring gender justice through the advancement of the rights of Nigerian women as full citizens.

The gender bills proposed in the amendment of the Nigerian Constitution which sought to enhance the lives of women and provide opportunities for them to participate fully in the political and governance space as well as inclusive citizenship rights include: #35) Special Seats for Women in the National and State Houses of Assembly; #36) Expansion of the scope of Citizenship by Registration (Citizenship to the foreign-born husband of a Nigerian woman); #37) Affirmative action for Women in Political Party Administration (Grant women 35% affirmative action in party administration and leadership). #68) Reserved Quota for Women (Grant 35% appointed positions to women).

Women make up nearly half the entire country’s population in Nigeria but are underrepresented in Nigeria’s political space. Presently, only 8 out of 109 Senators are women, only 22 out of 360 House of Representatives members are women, there is no female governor, and 44 out of 990 State Houses of Assembly are women. As we all know, inclusivity in the public space is a fundamental aspect of modern democracy, and improved representation of women has been shown to have benefits such as improved policy changes, economic growth, and enhanced peace building.

This shameless act by men who were elected by both women and men to represent them in the service of the nation is a gross display of lack of respect for the dignity and rights of women. It is also a demonstration of poor accountability for the progress of women and by implication, the progress of the nation. What they have said, which Nigerian women have heard loud and clear is that we do not matter, they do not care about us, and no matter what we do, we are regarded as second-class citizens.

We join other women’s organisations and groups as well as well-meaning Nigerians to reject the NASS rejection; to demand that the NASS puts the advancement of women on the Agenda by approving the relevant Bills; to call on the government to end the patriarchal practices that undermine the dignity of women; to call on all stakeholders to protect the present and future generations of women by demanding that Nigeria should do right by women. 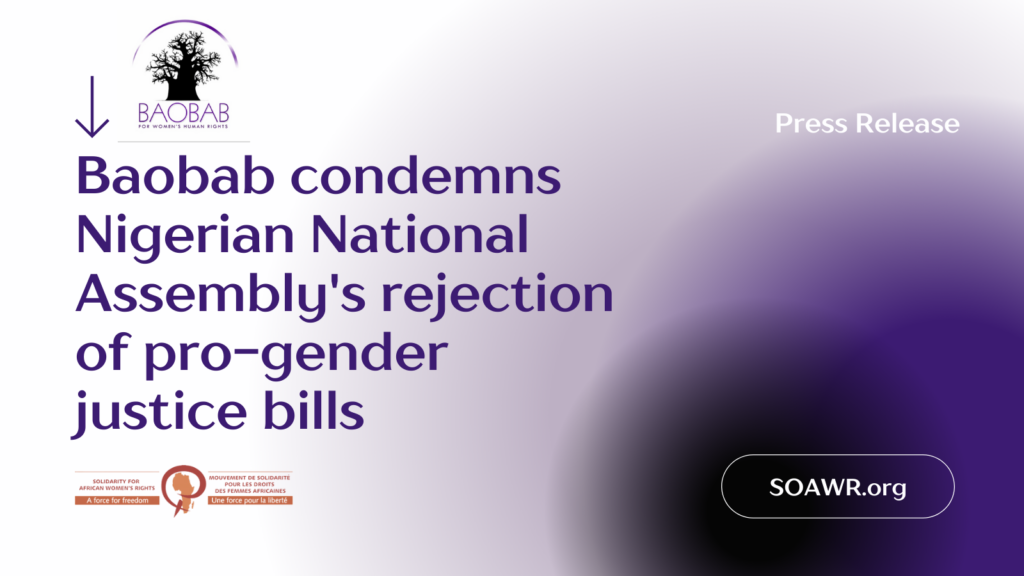 The SOAWR Coalition is pleased to introduce our 8 new SOAWR Members! We are now a Coalition of 71 members working across 33 different African member states. To find out