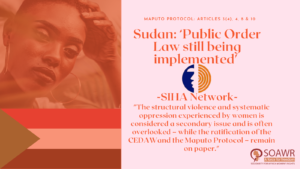 Source: SIHA Network, September 2021. On August 15th 2021, Sudanese artist, Fatim Ibrahim Hassan (also known as ‘Marwa Al-Dowaliya’) was physically assaulted and sexually harassed, according to her alleged statement to SIHA on August 19/2021, by 13 policemen from “Sharg Al Nile Police station” of the “community Security division”, which has been known since the Al-Bashir regime as the Sudan Public Order law divison. Marwa was assaulted alongside another 8 women and 21 men. This situation happened during a police raid on a wedding ceremony in Khartoum North – Sharg Al Nile area. Marwa allegedly indicated that she and the