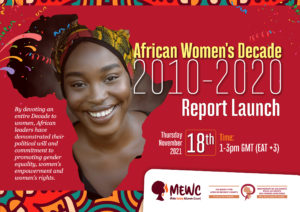 Read the Report & its Key Findings 2020 marked the end of the African Women’s Decade 2010–2020, adopted on 15 October 2010 in Nairobi, Kenya, under the theme “Grassroots Approach to Gender Equality and Women’s Empowerment.” The launch of the Decade represented a testimony to the African Union’s commitment to the advancement of the gender equality agenda and women’s rights across the continent. Its end has coincided with the celebration of the 20th anniversary of United Nations Security Council Resolution 1325 and the 25th anniversary of the Beijing Declaration and Platform of Action. Make Every Woman Count (MEWC), one of